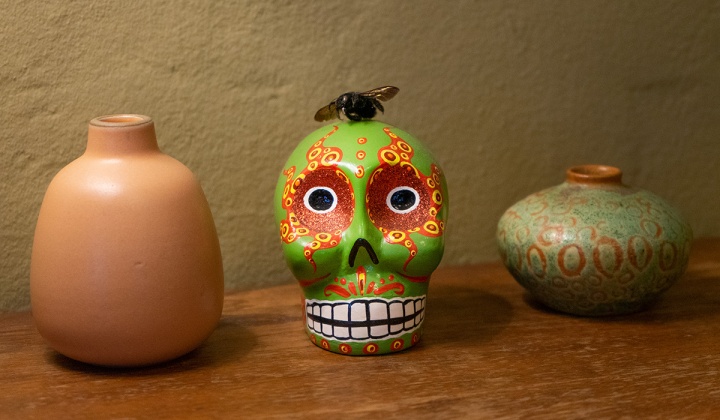 I was talking to my mom on the phone yesterday and broached the holidays. I haven’t wanted to face it. She’s been coming here every year for 18 years. Not being together is a big deal. I said, well, maybe that’s the very unexpected silver lining of this horrible election season, I’m so upset about that I can’t be upset about Christmas. She says, good job turning lemons into unsweetened lemonade.

She got it from my grandmother, who was a formidable woman. Maybe scary. She was a scary woman. She didn’t laugh so much as cackle. My grandmother was a Texan, the type that lived without air conditioning, in Texas. She and my grandfather lived on a farm/ranch as far away as the moon. It took a long time to get there. If, say, you forgot to get bread at the grocery store, then your dinner wasn’t going to have bread. It was three weeks to the nearest anything. My grandmother served dinner late. She said people will eat anything if they’re hungry enough. You can work out in your own mind whether or not she was a good cook.

If anyone told my grandmother what she “had” to do. Her reply was: I don’t have to do anything but die.

Back to my mom, I found the big insect on the day of the dead skull in the picture above while talking to her on the phone. I mostly call her while I walk the dogs because I like to walk and talk. I was telling her I wanted to take it home but feared it would get crushed in my purse. If you’ve been reading this blog, specifically the last three posts, you know my purse is currently NOT overstuffed! It’s actually understuffed. There was nothing hard and protective I could put this fragile fellow in. She suggests I blow air into a doggy poop bag and let the air be the protective barrier. Genius! It worked like a charm. Who else can I turn to for this level of quality advice? No one! I love you mom.

Happy Día Day Los Muertos. I never want you to be gone but you can rest assured that when you are, I will remember you.

I have a 16 year old son. In the deep past I was the person ultimately in charge of his room. I didn’t fiddle with it day to day but I re-arranged the furniture every few years, re-organized the stuff so it was developmentally up to date, thinned the toys. Four years ago was the last re-arrangement. Initially quite satisfying, the room slowly calcified into something stale and arid. Only occupying 1/20th of the available surface area, he had pilfered a small side table from us which he used, sitting on the floor, to do absolutely everything. There is a desk and I kid you not, he hadn’t sat in it for four years. Four full years! You could tell by the dust on top which was thick enough to make felt. He slept on the bed at night and all other floor space was like outer space, you could see it but you did not tread into it. Why!!??!!

He seemed like someone who lives in a basement. Boxes and items everywhere. Big piles of who-knows-what where the middle of the room should be. I was afraid he and the room would be just like this, a 50 year old man hunched over a side table laptop with no chair, forever. It pained me in two ways; wasted potential and overwhelming wrongness. Add a hardy helping of those two condiments to your daily sandwich for a few years and guess what effect it might have? I felt A LOT of frustration. I really wanted to go into the room and re-do it. I am good at that. I enjoy that. But…I was not invited. My assistance was not welcome.

I tried everything; yelling, screaming, crying, bribing, cajoling, flattering, threatening, brainstorming. Eventually I tried giving up. Giving up is the one that worked.

My son is old enough to have control. My son deserves to author his own experience. Developing one’s own creativity is not a straight line. It’s not efficient. It’s not goal oriented. I wanted to take my well honed creativity and flex it with his stuff in his space. Then I wanted him to love that and thrive. Mostly by occupying more parts of the room. Why is that even important to me? I almost always sit in one spot on the couch and it doesn’t make me love the living room less. But the problem was real, he was trapped in the past.

I did one thing that might have helped. I had all of us find pictures of rooms that fit his style descriptions. We sat on the couch, me in my spot, and shared the images. I bit my tongue and tried really hard to listen to his responses. He told us he hated some of his furniture and didn’t think we would let him get rid of it. So in listening I discovered that what I really needed to do was make it safe for him to tell us what was holding him back. I used what I learned to make very tentative suggestions about items we could look for and acquire.

But he had to do the actual work. He had to reckon with the dozens of toy’s still in their boxes under his bed (sold box by box on eBay to some other hoarder a few years away from this process). He had to touch his stuff and figure out what sparked joy. He had to come to terms with the results of making ten drawings a day and never throwing anything away. He had to decide if he wanted to live in an overstuffed museum of past obsessions or in a space with the potential for new ones. He had to make the hundreds of decisions that have to be made.

Creativity is really just getting used to making many small decisions in a sustained and focused way for as long as it takes. If I could pass on one thing to my son, it wouldn’t be receiving decorating services from his mother, it would be developing his own creative muscle.

A few days ago I got an email from him. An email, guys! That’s another blog post but I’ve been teaching him to email. It’s like teaching a cat dog tricks. The email was pretty terse. It had a subject heading of “Rug”, then only a link. I’ve never bought anything faster than I bought that rug. His room is now quite wonderful, extremely different and in flux. He is doing his thing, on his own momentum. It’s happening!

Sidewalk Face 1146. I found the flowers laying in the grass. How did they get there? It was just two, not a bouquet, no stems. They looked like eyes so I picked them up. A blotchy patch of pavement half a block away called out and said "I can be the base". I needed a nose so I picked a dandelion.
Sidewalk Face 1145. I just wrote two back to back beach loving blog posts. Link in bio. Check it out if you love the beach or skip it and simply enjoy this funny little sand dune face. The world churns and sputters but he just soaks up the sun and smiles.
Sidewalk Face 1144. Ghost of Sidewalks Past. Swipe to see him with my dog Feather. All I added was a single dried up olive. Do you see it?
Sidewalk Face 1143. The beach is my favorite sidewalk.
Sidewalk Face 1142. Spiders love bushes! I see these webs all over. They are made by funnel weaver spiders. The mouth shape was there so I added the eyes.I know I’ve said this before but I really like the faces to be minimal if I can achieve it.
Sidewalk Face 1141. SWIPE FOR STILL SHOT AND SWIPE AGAIN TO SEE MY CUTE LITTLE DOG DECAF.
Loading Comments...