This is my 100th blog post. It took one-month shy of seven years to get here.

Nobody knows what they’re doing when they start. I didn’t know when I started but I know more now. What might I know in ten years? I hope I find out.

The title quote is from James Clear. It helped me a lot. I was not doing things I “wanted” to do because I didn’t really want to do them. Or I “wanted” to do them at a high level, a level so high it was only possible to imagine doing it, not actually do it. I “wanted” to do yoga for an hour like I did at my yoga studio before the pandemic. But I never wanted to be in my living room with my yoga mat for an hour. Never. Never once did I want that in the past year. That’s why I went to a yoga studio in the first place. Because once you’re there, there is no escape. The social pressure is really important for me to overcome lethargy.

But in dwelling on the quote, I thought maybe I could start with something very very short. I could just do it for the length of one song. Just a few stretches. That’s it! One song Caren. You got this.

It worked! That was not too bad. I did not hate that.

Over time, I found that I was totally willing to do yoga for the length of a few songs. Sometimes I would do more than I intended. Isn’t that fun? That’s like a habit starting to form. Woah! I now exercise several mornings a week for ten minutes. Ten minutes is something I can manage. Ten minutes doesn’t freak me out. Ten minutes is happening. I don’t have to pressure myself into it. It’s something I actually like to do. I’ve built a habit.

Rather than make your hopes and goals bigger make them smaller. Make them so small you are doing them.

Are you by chance curious what little book I wrote this quote in? It’s last year’s pandemic little book. Here is a picture of the cover. I can’t get my fill of Danny Trejo in pink. His vegan donuts are off the hook. Try them if you are in Los Angeles.

My whole practice is about responding. It’s the opposite of visualizing an image in my head. I can’t even begin until I’ve located something. Being alert and observant is the entry point. Always on a treasure hunt, I’m lucky to live in a location with such variety of trash. (Ha! Can’t believe I’m writing that).

When I come across an item never before used, the pull to work with it is overwhelming. If I don’t have time in the moment or need a better backdrop, I pick it up and carry it with me. Stuff that resembles facial features are most likely to be remembered. They get fished out of the bag to be incorporated into a face right away, but other objects require more serendipity on their way to facehood. It’s much easier to say yes, we should do something with you, but not now, and stick you in a bag then it is to stare deeply at you until you finally start to stare back. Hence, this Bags of Crap Series. The Bags are full of intriguing non facelike objects that needed a full weekend of desert induced serendipity to coax them into saying hello.

I don’t remember finding this card but I would definitely pick it up again as he’s as close as I’m ever going to get to an authentic Prada item. His poshness however, was not an asset. Not only was he was never needed to complete a face on the pavement, he wasn’t even a contender. Business cards are hard! Can you think of what to do with them? But all on his own, he’s rising to the occasion letting me know what he thinks of me and my process.

It’s one thing to carry a slip of paper around for several months, broken car mirrors and bicycle chains are another story. Mostly I would say, you have to make the face right away and then leave that junk where you found it. But I picked them up. And carried them around. And felt annoyed by them until the desert.

A detached and rusty bicycle chain is just a really cumbersome thing to haul around. It’s greasy and heavy. Not good for purses. But it did suggest a strong ability to make a head and shoulders outline, stronger than most items I encounter. Once you’ve committed to storing it inside a doggy poop bag and lugged it up and down the street for several weeks, you are stuck in a creative sunk cost fallacy. You can’t bear to cut it loose without getting that face in return. I got so tired of schlepping it I stopped using my bag altogether and started another one. This has not seemed like the right choice. Until now. I am happy to share that he was worth the wait/weight.

I didn’t imagine pairing him with desert dirt and dropped salt cedar leaves. I thought he’d be on pavement. Lucky me! My wonderful host and friend suggested the mustache. She’s got so much style!

Now for the final high challenge item, the difficulty of making a face on a mirror is camera reflection. I used this as an opportunity for a self portrait. I really like it!

Do you think the person whose car suffered this accident would feel even one tiny bit better if they knew this was the outcome? We don’t always see how things play out. Sometimes something wonderful is born from something sad.

Okay guys, I did it!!! It took two and half years, but I cleaned out the bags and made some faces. The vacuum cleaner now has the closet floor space to herself and I have two empty purses back in rotation for other types of adventures. I’m officially crossing this off the To Do list! Time to call Mom! 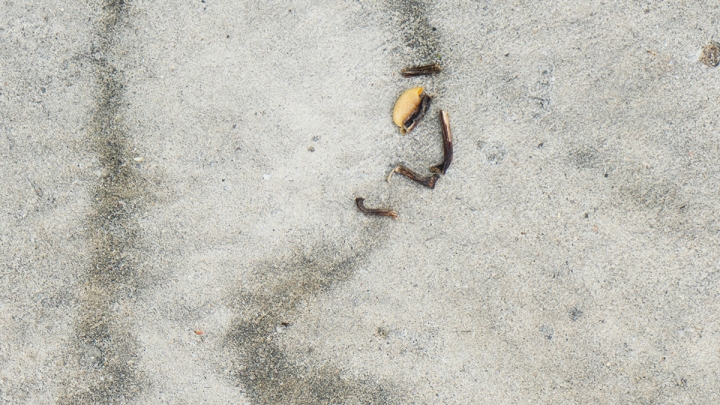 I’ve noticed that if I leave the house without my good camera I probably won’t make any faces. Maybe one will scream at me until I snap a portrait but a reluctant one-off face rarely leads to another. Like a leaky water hose, some creativity dribbles out but it’s not intentional.

If I do take my camera then almost for sure I will make a face. I’ve intentionally turned the hose on so of course I am going to water a plant. And if I’ve made one face, I am very likely going to make another. And if I make two I will probably make four and the fourth one will really jazz up my day. At that point I am loose and playful. I am on the hunt, I am hooked up to a sprinkler dousing the whole yard in creativity.

At the beginning of the pandemic, touching anything felt dangerous so sidewalk face making slowed down dramatically. At that point I was washing plastic wrapped bags of bread in the sink like dirty dishes to disinfect them from the amazon delivery. Boy was that tedious! With the feeling of an invisible threat everywhere all the time, it felt wrong to make faces so I did some with my feet, I only used plants and I went back to the archives.

Now I feel okay touching things again. I’m always wearing a mask. I have hand sanitizer and everything has been baking in the sun for hours. But all those months of reticence meant I wasn’t bothering to lug my camera around and hunt, hunt, hunt. So yeah, one would pop up here and there but was I making an effort? No. Did I feel enthusiasm? No. Was my practice thriving? No. It felt kind of far away and faded. It felt dry and dehyrated.

Recently I’ve brought my camera along and you know what, I’ve been regularly making four faces on every dog walk. The first is sort of should I or shouldn’t I? What the heck. Let’s do it. Then maybe the camera stays out, around my neck. The 2nd one is just happening. No need to question if it’s a good idea. The third is like oh hell yes. And the fourth is me wondering if I could arrange to do this all day.

I can’t color correct them as fast as I make them. The last one I made is a new all time favorite. Creativity is a conduit, a pipe, a portal, a channel. You have to do things to keep the channel clear and open. Just like exercise keeps the cardiovascular system healthy, making more leads to making more. So if you want more, make something and make it soon.

Sidewalk Face 1190.
Sidewalk Face 1189. I am compelled to put eyes on things. Swipe to see before.
Sidewalk Face 1188
New print offering! Limited Edition of ten. Only available until May 15th.
Sidewalk Face 1187. My guess is that he was protecting a rolled up newspaper in an earlier incarnation but I’m not totally sure. Where do you think he came from? Il est content.
Sidewalk Face 1186. The light part is dry pavement. The shape is how it was evaporating. I drew the facial features by tapping my finger in rain water. To achieve shading, I had to wait for the water I added to evaporate. It’s a difficult process to control but that’s ok with me. I like surprises. You can see me finding and making him in today’s reel.
Loading Comments...