When I was a kid, around age 10, we had a yard with a split rail fence. I would lay on the bottom rail, holding the top rail while I found my balance. It was tough because the rails were round and could twist a bit side to side. As soon as I was stable enough to release my arms I would imagine that I was suspended over a deep pool and a killer whale was gliding under the fence, its dorsal fin just inches from my back. This made the balancing challenge much harder. I could never sustain the position for long. I would get frantic and fall off. 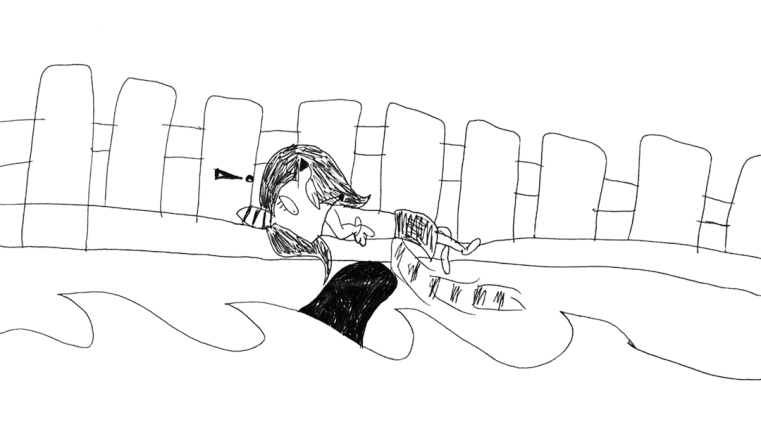 Illustration courtesy of my son.

There must have been something delicious in that faux fear as I would do it over and over, making it more real each time. But I also knew that what I was imagining could not happen.

Now the game is to listen to talk radio while making dinner, then try and forget what I heard while eating with the family. Not falling off would mean I was enjoyable to be around rather than freaking out. I’m about as good as I was then, I can do it but not for long.

Sidewalk Face 1190.
Sidewalk Face 1189. I am compelled to put eyes on things. Swipe to see before.
Sidewalk Face 1188
New print offering! Limited Edition of ten. Only available until May 15th.
Sidewalk Face 1187. My guess is that he was protecting a rolled up newspaper in an earlier incarnation but I’m not totally sure. Where do you think he came from? Il est content.
Sidewalk Face 1186. The light part is dry pavement. The shape is how it was evaporating. I drew the facial features by tapping my finger in rain water. To achieve shading, I had to wait for the water I added to evaporate. It’s a difficult process to control but that’s ok with me. I like surprises. You can see me finding and making him in today’s reel.
Loading Comments...
%d bloggers like this: