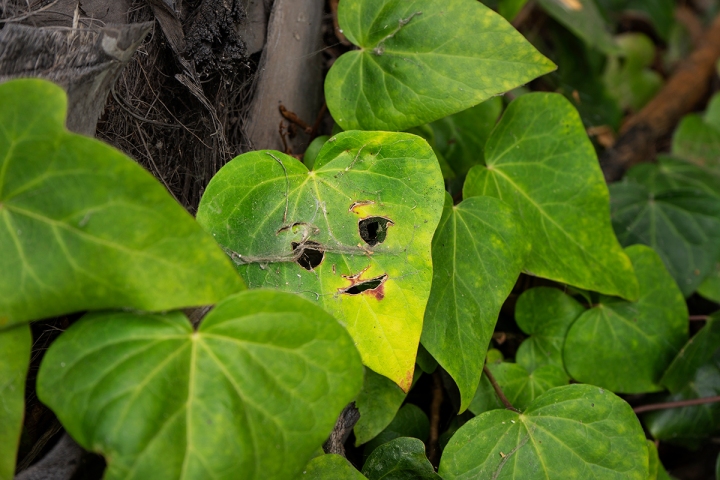 I’ve been making leaf faces for several years. Initially it was a lark. Everything starts as a lark, a lark being a carefree episode, something of no importance that is surprisingly enjoyable. The thought crossed my mind to make a face in a leaf and I acted on it. I get a kick out of visiting the leaf and watching it change over time. It takes a while for the cuts I make to scar over. Other alterations occur as well, things I can’t anticipate,like shifts in color and spider webs. Living things are always in flux. I dig that my initial creative contribution is just the starting point. The “art” would not be complete until nature had a pass.

I do it pretty regularly and now have quite a collection of leaves. At some point in the process I press them flat between paper in a big book and put some heavy weight on it. There really is no finish point as they are fragile and evolving towards dust, no matter what I do to slow that process. When I get around to selling prints, which I hope to be doing soon, I am going to include a leaf face with every purchase.

I was hiking in Runyon Canyon, noticed these beautiful reddish stripped dried leaves, picked some, soaked them in water, scratched in faces and pressed em. Fun!

These are delightful to play with as you can make a face just by pressing them with objects. They bruise up almost instantaneously. Very satisfying. I wish there were more magnolia petals laying around. I am not going to pluck them off the trees. But they don’t dry out well. The whole petal turns brown and you can barely see the face.

I have several orchid plants, my kid and husband like to buy them for me for Mother’s Day or my birthday. So lovely! The flowers last for at least a month. They are wonderful gifts. I am not an ace green thumb but I do keep everything watered and I’ve had several orchids bloom more than once. The second bloom feels like a miracle, like a victory of the forces of good against evil. How I love it! But I’ve never managed three blooms and eventually most of them die. Who knows why, the leaves just start to yellow and one day you see a leaf no longer attached, lying beside the sad plant. Oh dear!

This happened recently. The orchid had no more blooms to give. Its leaves are very plump with water, much thicker than most plant leaves. They take more than 24 hours for the bruised part to start darkening. But they do change eventually and it’s enjoyable to watch.

I think these are sort of the opposite of painting in oil. They don’t preserve well, deteriorating almost instantly, they’re impossible to control and too delicate to hang on a wall. But they are appealing enough to entice theft! Just as art museums have cat burglars, I have had leaf faces plucked from ivy bushes before I took my final photos. Now I try to keep them hidden. They may be ephemeral, but they have power, an ode to the transmuting mysteries of life force.

2 thoughts on “Collaborating with Nature”

Sidewalk Face 1146. I found the flowers laying in the grass. How did they get there? It was just two, not a bouquet, no stems. They looked like eyes so I picked them up. A blotchy patch of pavement half a block away called out and said "I can be the base". I needed a nose so I picked a dandelion.
Sidewalk Face 1145. I just wrote two back to back beach loving blog posts. Link in bio. Check it out if you love the beach or skip it and simply enjoy this funny little sand dune face. The world churns and sputters but he just soaks up the sun and smiles.
Sidewalk Face 1144. Ghost of Sidewalks Past. Swipe to see him with my dog Feather. All I added was a single dried up olive. Do you see it?
Sidewalk Face 1143. The beach is my favorite sidewalk.
Sidewalk Face 1142. Spiders love bushes! I see these webs all over. They are made by funnel weaver spiders. The mouth shape was there so I added the eyes.I know I’ve said this before but I really like the faces to be minimal if I can achieve it.
Sidewalk Face 1141. SWIPE FOR STILL SHOT AND SWIPE AGAIN TO SEE MY CUTE LITTLE DOG DECAF.
Loading Comments...